Muntjac (Muntiacus reevesi) were originally introduced from South East Asia to Woburn Abbey Estate in Bedfordshire during the 1800s. The secretive little deer are prolific breeders and have since spread across the majority of England into Wales and more recently Scotland.

The Muntjac deer has no fixed breedin

g season or rut. The doe (female) can give birth to fawn (young) and may conceive in any month of the year. The majority of adult doe are constantly pregnant during there 8-12 year lifespan in the wild. The buck (male) may pair-up with a female during courtship, and in rare cases remain close to the doe and fawn for a period of several months. Otherwise the doe raises her fawn alone in a protected and secluded area.

Typical features of the Muntjac deer include secretion glands on the eye sockets, inner legs and forehead. Muntjac use these scent glands to mark and identify territory between competing adults. Notably the front legs are shorter than their back legs which enable them to climb or jump over obstacles including hedges, walls and fences. The underside of the tail is white, and looks similar to a rabbit when running away. The hooves are small in comparison to the overall size of the deer sometimes reaching up to 16kg at full maturity. 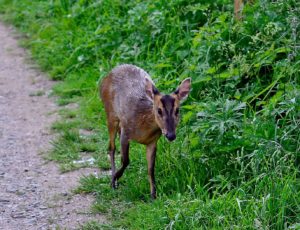 Both the buck and the doe may bark, scream, or call out to establish personality, their own territory, or to warn-off potential predators. As the least studied of all mammals in the UK, more local studies are needed to help recognise patterns of behaviour and habitat preference (and ultimately woodland management).

As browsing animals Muntjac deer have a healthy appetite as they nibble away at grasses, wild flowers, shrubs and the bark of trees. Bramble leaves often make up a percentage of diet. However Muntjac can be seen eating spring bulbs including Bluebells and Daffodils. Fallen Crab Apples are also a source of available food in winter. Fragrant herbs and shrubs including Horseradish, Honeysuckle, Roses and Bedding Plants are also favoured foods when browsing in people’s back gardens, orchards, and parks. 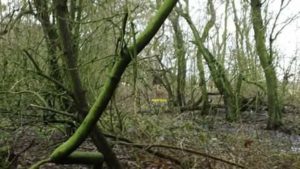 Adult buck Muntjac in Oadby. The photo demonstrates the camouflage / secretive nature of the animal.

Muntjac deer should never be disturbed or approached in Nature. The doe will protect her fawn with kicks and head-butts if necessary, when she feels threatened by dogs, foxes or people. The mature buck carries a  set of pointed antler and fang-like teeth, which could be used in defence against over-curious intruders.

Unfortunately, countless Muntjac deer are involved in road traffic accidents every year. As fawn grow into young adults they are forced away by the female to find their own territory. This sometimes involves travelling long distances, crossing roads and train lines to find new habitat.

Muntjac can be found throughout the Aylestone Meadows with many sightings and slots (footprints) of adult Muntjac in various locations. The number of visitors and dog walkers across the Aylestone Meadows restricts the local Muntjac population to those areas of bramble and thicket that remain undisturbed during the daytime. During the night-time the adults may travel long distances to find fresh feeding sites and potential mates.